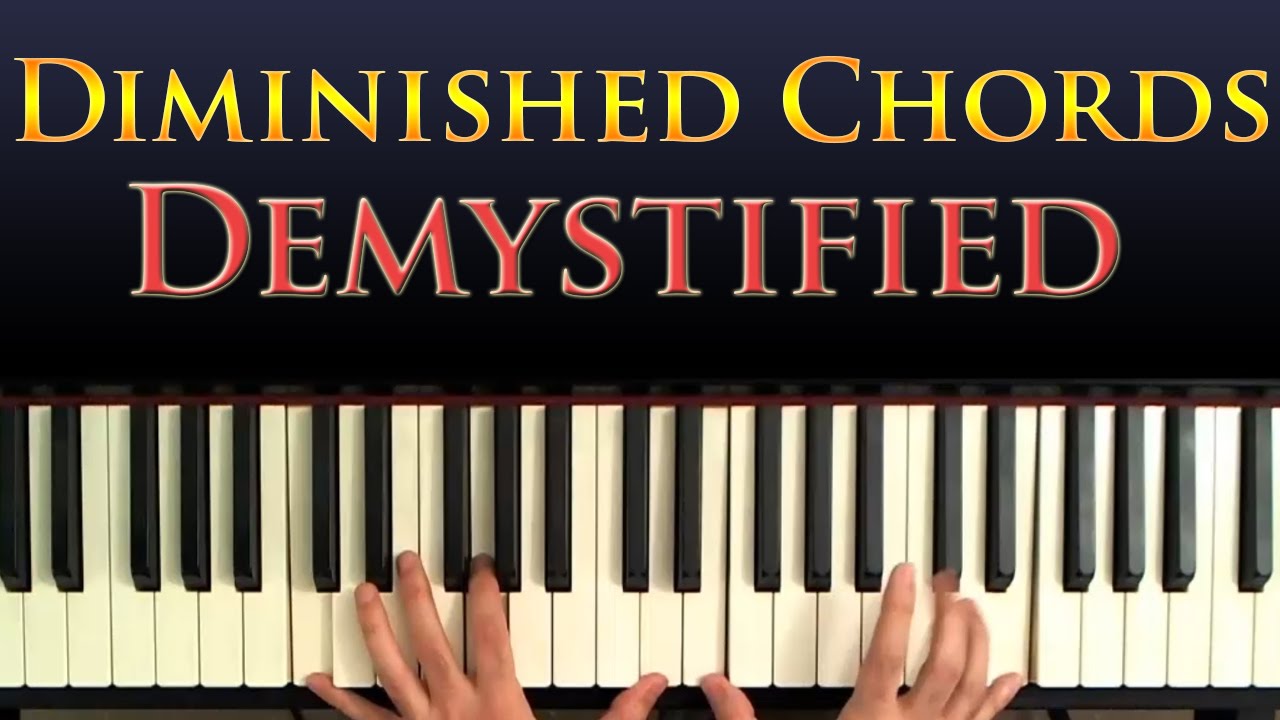 Jazz Piano
Share on Facebook
Share on Twitter
Share on Pinterest
Share on LinkedIn
Diminished chords don’t get as much love as major and minor chords, but they should! I find that they give my playing a very 30s/40s kind of feel to them. In this jazz piano video lesson we are going to take a look at how diminished chords fit into ordinary progressions by leading into other chords, and how they can be used to enrich any jazz piano harmonic chord progression.

Here’s what I’m going to cover in this lesson:

2. We’ll see that although we can construct a diminished chord for any note (all 12 of them), they actually fall into three groups, each group containing four equivalent chords. For example, Cdim7 = C Eb Gb A and Ebdim7 = Eb Gb A C are actually the same chord since they contain the same notes, only in a different order! The three groups will be:

3. Then we’ll talk about how diminished chords can be used to lead into other chords. We will learn that a chord can be approached by a diminished chord a semitone below, above or right on it. I will show an example that will use all three “tricks”.

Who is this Jazz Piano Lesson Aimed At?

This tutorial is aimed at piano players interested in expanding their chord voicing vocabulary. Although some theoretical concepts are discussed throughout the video, you really need to know very basic concepts (what a semitone is, for example) to make use of the forms presented! Just watch, listen and copy what I play, and enjoy! These chord voicings are not difficult to play and do not require any special piano technique.

More About Diminished Chords from Wikipedia:

“The most common form of the diminished seventh chord is that rooted on the leading tone; for example, in the key of C, the chord (B, D, F, Ab). So its other constituents are the second, fourth, and flatted sixth (flat submediant) scale degrees. These notes occur naturally in the harmonic minor scale. But this chord also appears in major keys, especially after the time of Bach, where it is “borrowed” from the parallel minor. Fétis tuned the chord 10:12:14:17.

Seventh chords may also be rooted on other scale degrees, either as secondary function chords temporarily borrowed from other keys, or as appoggiatura chords: a chord rooted on the raised second scale degree (D#-F#-A-C in the key of C) acts as an appoggiatura to the tonic (C major) chord, and one rooted on the raised sixth scale degree (A#-C#-E-G in C major) acts as an appoggiatura to the dominant (G major) chord. Because these chords have no leading tone in relation to the chords to which they resolve, they can not properly have “dominant” function. They are therefore referred to commonly as “non-dominant” diminished seventh chords or “common tone” diminished seventh chords.

In jazz, the diminished seventh chord is often based on the lowered third scale degree (the flat mediant) and acts as a passing chord between the mediant triad (or first-inversion tonic triad) and the supertonic triad: in C major, this would be the chord progression E minor – Eb diminished – D minor. The chord, “plays no role in…jazz.” The passing chord is used widely in Brazilian music like Choro, Samba, and Bossa Nova”

Here are other interesting playlists from my channel which group together my different piano lessons by theme/category: