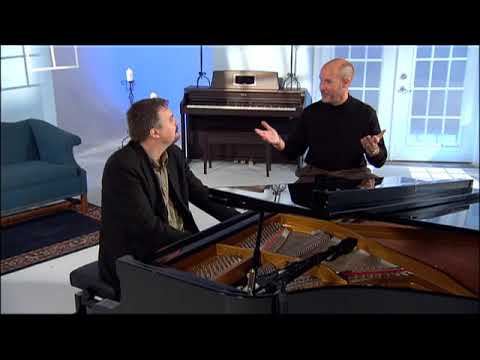 Take some piano lessons from Scott Houston “The Piano Guy.” In this video, Scott Houston and his guest, Dave Powers, demonstrate playing the Intro, signature lick from the Elton John hit, Crocodile Rock. The song is played in the key of G like Elton John recorded it.

Dave starts out by playing the intro to the song, Crocodile Rock so that you can bring it to mind. Scott Houston and Dave discuss how the song was played in a style similar to rock songs produced in the 50’s but the song was recorded by Elton John in the 70’s.

Dave demonstrates playing the chords used in the signature lick in the intro, Crocodile Rock: G, Em, C, and D with his right hand. He also shows you how to invert a chord while his left hand plays the roots of the chords.

Scott’s life goal is help you learn to play piano through piano lessons that you can take anywhere and at any time to get you started having some fun at a piano or keyboard as quickly as possible.